We’re now going on almost three months since the new Rule 11 took effect with the updated DIME fees and procedures.  Time flies, doesn’t it?   There has been some litigation that has ensued as a result of the recent changes, but overall the changes have been well received.  This is likely because most people prepared adequately for the changes that were taking effect well before the start of the New Year.

The litigation that has ensued has been primarily regarding the “regions” listed in the checklist contained on the Application for DIME and the body parts involved in the claim.   Since the “regions” have caused some confusion, the fees have also needed clarification.   Some of the litigation revolved around the specific body parts to a claim and Rule 11’s breakdown of cost.   The checklist looks as follows: 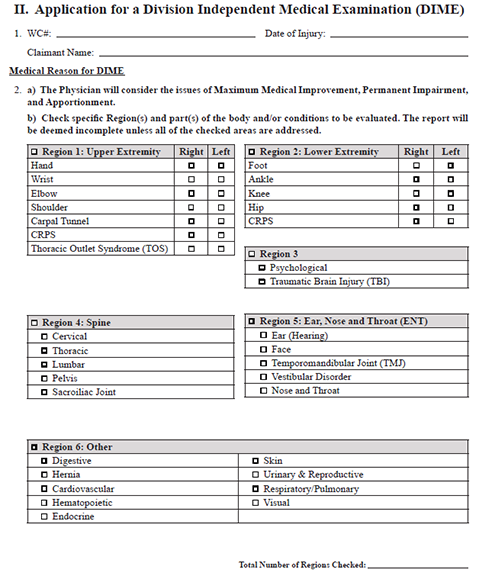 Above each set of body parts, the boxes are listed as regions.  Pursuant to Rule 11, “less than three regions” is a fee of $1,000.   “Three or more regions” is a fee of $1,400.   It is recommended to double-check the Applications for DIME that are received to see if compliance with the Rule is met.   Any discrepancies and/or arguments concerning interpretation of the Rule can be handled by the Prehearing Administrative Law Judges.   The Judges have done an outstanding job of interpreting the Rule and correcting many issues for the DIME unit.  Also note, that some of the disputes have resulted in body parts that either were or were not related to the claim.   Such disputes have involved related body parts that should be part of the DIME, however claimants have tried to keep them out to lower the overall costs of the DIME.   Other disputes have arisen between the terms “and/or” as used in the Rule.  The arguments pertaining to the semantics have been resolved mostly using the word “or” to imply that either one or the other conditions must be met to trigger a particular fee.

In general, the DIME process seems to be running smoothly and interpretation of the new Rules seems to be pretty straightforward.   Like any Rule change, it will take some time to get used to and iron out the wrinkles.  It is important to double-check the new Rule and make sure compliance is met to avoid missing any particular arguments that will pose any sort of leverage in a claim.   Recall, that the new Rule only applies to Notices and Proposals filed on or after January 1, 2019.   Any Notice and Proposal filed before that date adheres to the old Rule 11.

If you have any questions regarding the changes to the Rules or the updated statutes, feel free to contact us.