Thank you for taking the time to read our Firm newsletter. Our newsletter provides a monthly update on recent developments within our Firm, as well as in the insurance defense community. 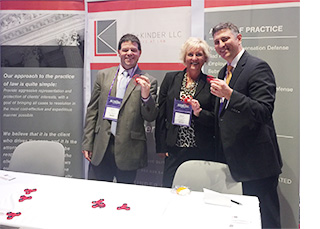 Of Counsel M. Frances McCracken successfully overcame the DIME physician’s opinion on permanent impairment by clear and convincing evidence in Smith v. Interactive Corp., W.C. No. 4-967-607-01. Claimant sustained an admitted injury to the left shoulder. Claimant was placed at MMI with a 5% scheduled impairment rating. Respondents filed a FAL. Claimant requested a DIME. The DIME physician agreed with the ATP’s date of MMI, but assigned Claimant a 25% scheduled impairment rating. Respondents sought to overcome the DIME. Respondents’ expert opined the DIME physician failed to review and / or account for Claimant’s pre-existing conditions/injuries to the left shoulder, did not account for the discrepancies in Claimant’s subjective complaints versus those documented in the records, and failed to provide an explanation of the 25% scheduled rating pursuant to the AMA Guidelines. The ALJ determined, by a preponderance of the evidence, that Claimant suffered a 5% scheduled impairment rating to the left shoulder. The ALJ concluded that Claimant failed to prove by a preponderance of the evidence that he was entitled to maintenance care other than as recommend by the ATP.

In a second win, Of Counsel McCracken successfully defeated Claimant’s request for appeal in Jaterka v. Johnson & Johnson, W.C. No. 4-978-459 (ICAO September 11, 2017). Claimant suffered an admitted injury to her left wrist and elbow. Claimant also complained of a left shoulder injury; however, Claimant’s ATP opined that the left shoulder injury was not work related. Claimant was placed at MMI. Respondents filed a FAL. Claimant did not object. Claimant later sought treatment with her personal physician for her left shoulder and underwent surgery. Almost one year later, Claimant filed an Application for Hearing endorsing the issues of compensability, medical benefits, petition to reopen claim, TTD, PPD, MMI and “medical reimbursement.” In the ALJ’s Order on remand, he credited the opinion of the ATP who found that Claimant’s shoulder injury was not work-related. The Claimant failed to meet her burden of proving that the treatment provided by her personal provider was authorized or related to the admitted work injury. Claimant’s Petition to Reopen was also denied as Claimant failed to present any evidence to show that the ATP erred in his diagnosis, treatment or placement of Claimant at MMI. ICAO affirmed.

Associate Matt Boatwright successfully challenged compensability of an alleged low back injury in Anstey v. United Parcel Service and Liberty Mutual Insurance. Claimant asserted that she suffered a back injury while lifting packages during the busy Christmas season. Claimant initially denied to her supervisors that her back condition was related to her work activities, instead claiming that the condition was from a prior injury at work. However, after examination by a physician, Claimant was told that her condition was not related to the prior injury. Claimant then claimed that she had aggravated her back while lifting at work. The ALJ denied and dismissed the claim for compensation finding that there was no evidence of a work-related injury.

LEGISLATIVE UPDATE—FIRST RESPONDERS’ COVERAGE FOR PTSD
2017 saw more legislative action related to workers’ compensation than Colorado has seen for the past few years. Three bills were introduced in the Colorado Legislature and all three passed. One of the newly enacted bills, HB 17-1229, was enacted on June 5, 2017, with an effective date of July 1, 2018 (subject to exception). It amends section 8-41-301, C.R.S., relating to the conditions of recovery for claims of mental impairment. Click here to continue reading this article.

Cases You Should Know

The ALJ Runs the Show: In Villegas v. Denver Water, W.C. 4-889-298-04 (August 22, 2017), Claimant lost on the issue of PTD benefits. Claimant appealed arguing that the ALJ erred in allowing Respondents’ expert witness to testify while denying Claimant’s request to sequester the Respondents’ expert witness, and denying Claimant’s request to call a rebuttal witness. Claimant also argued that the PTD standard was unconstitutionally vague, and that the ALJ did not have jurisdiction to hear the dispute because of the failure to set the hearing within the 180-day window. The ICAO determined it was within the ALJ’s discretion to determine which testimony to allow, and that witness preclusion is just one of several sanctions available to an ALJ for discovery violations. The ICAO refused to address the facial constitutionality of the PTD standard due to lack of authority. Finally, the ICAO upheld the ALJ’s finding that he had jurisdiction to hear the case, despite being outside 180 days from the Application for Hearing, noting that the 180-day window was “directory” rather than “jurisdictional.”

Moral of the story: Arguing every possible ground for appeal may be less persuasive than focusing on your strongest arguments.

Moral of the story: The emergency medical care exception is not an exception to the rule that a claimant must prove medical care is related to a work injury.

An “Exceptional” Tale of a Compensable Injury: In Barnes v. City and County of Denver Police Department, W.C. 5-003-724-04 (August 25, 2017), a Denver Police Officer was injured when he crashed his work issued motorcycle. Respondents denied liability, claiming he was traveling from work to his home following the end of a work shift. Therefore, the injury was not compensable in accordance with the “going to and coming from” Rule. The matter went to hearing. The presiding ALJ found Claimant’s injury compensable because Claimant’s travel was “contemplated by the employment contract” and there was a substantial mutual benefit for Claimant’s use of the motorcycle after work. Respondents appealed. The Order was affirmed as to compensability.

Moral of the Story: Additional written agreements conferring a substantial benefit between employer and claimant is an exception to the “going to and coming from” Rule as it is contemplated by the employment contract.

Who Knew? Sick Leave is not “Wages:” The second issue in Barnes v. City and County of Denver Police Department involved wage continuation pursuant to C.R.S. §8-42-124(2). Claimant used sick time for the work injury. Respondents asserted Claimant was paid his full wages during this time and therefore, they did not owe temporary benefits. The ALJ ruled the Employer was required to reinstate Claimant’s sick time, and convert the wages paid to “work injury leave.” On appeal, Respondents alleged the ALJ did not have jurisdiction to order the Employer to restore Claimant’s sick leave. ICAO modified the ALJ’s Order and ruled wage continuation may not charge sick time to offset temporary benefits. Once a claimant is charged earned sick leave, the employer cannot reduce its liability for temporary disability benefits. The employer must directly compensate claimant for temporary total disability benefits for time missed.

Moral of the Story: Employers cannot take an offset against sick leave for reducing TTD payments.

Liar, Liar, Pants on Fire: Jones v. Regis Corporation, W.C. 4-976-657 (August 18, 2017), involves a contested neck injury. At hearing, Claimant admitted a prior neck injury, but testified her symptoms “completely resolved” before the work injury. An ALJ found the claim compensable. A DIME found Claimant at MMI with an impairment. Respondents later discovered numerous medical records of Claimant for extensive prior treatment to the cervical spine. This included treatment that was just two days before the alleged work injury. Respondents sought to reopen the Order on the basis of fraud/mistake and withdraw the admission. At the second hearing, the ALJ found Respondents proved, by a preponderance of the evidence, the previous Order was issued by mistake, and set aside the prior Order. Claimant appealed and argued the ALJ erred because Respondents had the burden to overcome the DIME opinion that there was a work injury by clear and convincing evidence. ICAO disagreed. It held that the initial burden is to prove, by a preponderance of the evidence, an injury occurred in the course and scope of employment. C.R.S. §§8-41-301(1)(c) and 8-43-201. In this case, Respondents had the burden to prove the injury did not occur in the course and scope of employment since they sought to modify an admission and set aside the prior Order. C.R.S. §8-41-201(1). The burden of proof remained preponderance of the evidence because it is the threshold requirement to prove before compensation is awarded.

On the Road Again: In Turner v. Sunrise Transport, W.C. 4-981-338 (August 23, 2017), Claimant was an over the road truck driver hired in British Columbia. His employer’s company headquarters is in British Columbia, Canada. Claimant was injured while making a delivery in Colorado and sought Colorado workers’ compensation benefits. Respondents argued Colorado lacked jurisdiction. The ALJ found only 6.2% of Claimant’s work was performed in Colorado, which was insubstantial to create jurisdiction, and dismissed the claim. Claimant appealed. ICAO noted for jurisdiction, a substantial portion of the work must be done in the state and, in addition, it must be shown there was either an injury occurring in the state or a contract of hire in the state. United States Fidelity Co. v. Industrial Commission, 61 P.2d 1033 (1936). To determine whether there is substantial portion of work performed in the state, the ALJ may consider the Claimant’s “usual” and “regular” employment. Whether Claimant proved substantial employment was a factual determination for an ALJ. ICAO affirmed the ALJ’s Order.

Moral of Story: Though an injury may occur in Colorado, the state may not be the proper place to file the claim.